Father’s Day yesterday, and with the children away the opportunity for a day for ourselves and a walk down the Exeter Canal towpath. 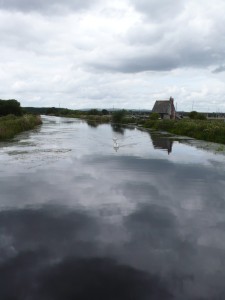 No walk for us is ever just a walk, and even if summer birdwatching all too often takes second place to gardens, we took the bins. Just as well: Reed Buntings all day, Goldfinches – at one moment upwards of a dozen in the willow on the opposite bank, Greenfinches (the first we have seen this year), families of Sedge Warblers in the reeds along the canal edge – see my Tumblr photo, Little Egrets, a Great Black-Backed Gull feasting on a very dead and very large fish, Swans, Herons in the air and at the water’s edge, a solitary Curlew, all manner of Tits (including some on bicycles), a Whitethroat, Gulls and Mallard, and Swallows all along the towpath, hawking insects.

And the highlight? Probably a Cetti’s Warbler in full view: we had heard it (as you do) but then there it was, on the top of bush, drowning out everything and everyone.

A perfect day. Calls from two of the children (sadly I still put the mobile in the backpack) and a text from number three.

And home to sit by the pond, have a cup of tea –

and to be surprised by a water lily that I remember planting but which didn’t flower at all last year.