It has been a wet and dreary August. There have been the occasional days of sun, and with it warmth, but otherwise rain and damp, muggy days. Bank Holiday Monday was promised fine and our plan was to walk the ridge west of Great Mis Tor, starting at the car park past Merrivale Quarry and climbing up to Middle and Great Staple Tors before round to Cocks Hill via Roos Tor and Petertavy Common. We should have known better, after a decade living on the edge of the Dartmoor, that the best laid plans . . .

At Merrivale visibility in the low cloud was little more than 50 yards, and although the route planned is easy, navigation in low cloud across a landscape with few distinguishing features is a challenge. We turned in the car park and drove back to Princetown, parked behind the High Moor Centre and walked out along the disused railway track to King’s Tor. Considerably tamer but just being out and walking was enough.

We stopped on the way back to climb up the lip of Swelltor Quarries and were rewarded with the sight of a Raven. Its granite quarries are one of the best places to find Ravens on Dartmoor, and the sight of one below us in the mist was quite magical. 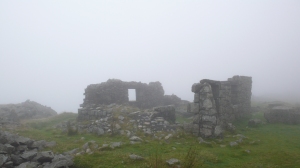 The low cloud may have restricted the view, but we found ourselves much closer to those birds we came across than we might otherwise have done. In particular we got within feet of a male Wheatear, which held its ground, looking at us, before flicking away, its white rump the last thing we could see as the mist swallowed it up. For me this bird is summer on Dartmoor, perhaps not surprisingly, as Dartmoor holds the largest population of Wheatears in southern Britain. By the time we got back to the Princetown car park the sun was out, and we drove home under a clear sky.

In a recent Slow Lane column for the FT, Harry Eyres wrote about the rightness of summer; and of summer as kairological time. You need to read the whole column, but in short he contrasted our expectation of summer, that ‘everything will be right, the sun will shine, the company will gel’ with the ‘bitter disappointment some of us feel when summer fails to materialise’. But, he goes on, ‘the essence of kairological time is that it cannot be programmed; those moments of rightness come from nowhere’. And such was last Monday.